I experienced my own private little Joe’s Garage moment this past weekend. Let me explain.

Last Thursday evening, I’d been playing some loud music – Admiral Freebee’s latest album, to be exact. It’s the kind of tunes you have to play at full volume if you want to fully enjoy them. Came 10 pm, being the responsible citizen that I am, the volume was lowered down to a pedestrian level so as not to offend the neighbours (belgian law says you can make as much noise as you want until 10pm).

Five minutes past 10, I get Neighbour #1 (we’ll refer to him as The Hairless Hunchback from now on) banging on my door yelling that I must “Turn it down!“. And that if I didn’t know him yet, I was about to find out! Yours truly opens up window, tells the Hairless Hunchback to chill, upon which he limps back to his cave — thoroughly convinced of my evil “let’s render the neighbourhood sleepless” masterplan.

Fast forward to last Sunday. We’re in need of some gasoline for the lawnmower so I strap the jerrycan to Gabriela’s scooter and temporarily park the scooter in front of my house. Enter Neighbour #2 (we’d refer to her as Poor White Trash Bitch From Hell from now on, but that’s a bit long. Instead, let us call her Betsy). Betsy is the kind of person that has nothing else to do but to stand in her doorway all day while watching the trafic go by – as opposed to, oh I dunno, getting a job. Betsy generally does this wearing nothing but a bathrooom robe and a wig (cigarette optional). But I digress.

So I get out of the door, and Betsy yells (and boy, can she yell): “You fuck, you better not play that loud music anymore, ‘cuz we need some sleep!” To which I reply: “It happens about once a year and when it does, I turn the volume down after 10 pm.” Her cheap wig wiggles back and forth as she retorts: “Fuck that we need some sleep and next time we’re calling the cops!”.

I mumble “whatever” and drive off for the gasoline. By the time I’m at the gas station though, my fury has reached boiling point.

At this point, I should make a confession: I can stand dumb people, but I cannot stand dumb people that lack even the simplest form of courtesy. For one thing, Betsy’s husband (we’d refer to him as “Ye Pervert Who Pees On His Garden’s Begonias Early In The Morning Wearing Nothing But White Underwear, Trust Me I’ve Seen It With My Own Eyes” but that’s a bit long, so we’ll go with Bobby Potatohead) perpetually (illegally) parks his car right in front of my garage, thus considerably complicating my stalling my car into the garage.

Hence, once I came back (Betsy was still outside, wiggling about her wig), I gave her a piece of my mind. Some of my spit may well have landed on various parts of Betsy’s facial features.

Betsy probably hates my guts now. In fact, she had Bobby Potatohead conspicuously park his car right in front of my garage. But frankly? I don’t give a proverbial shit. 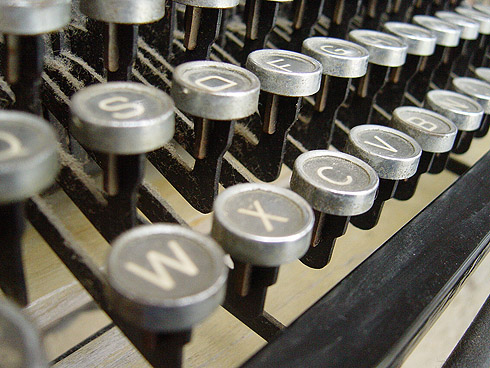 My dad’s old typewriter. As a teenager my sister would type out school papers on this thing — until we switched to an insanely cool Olivetti. Progress!

So yeah, I have a new layout.

As things are a bit slow at work for the moment, I had some time to noodle around with photoshop and skEdit which resulted in what you’re looking at. If you’re wondering, the blurb on the top is my poor attempt at programming wittiness. Suffice it to say it uses php’s ternary operator, one of my favorite php constructs.

Well, we lost another client today. We’d been hosting this guy’s website since 1999, done the graphic layout and the backend programming. He always seemed very pleased with the result. Until about a year ago, some wiseass went and told him he could offer much cheaper hosting and a much better backend solution. This guy came to talk with me about this, and I had checked out his site prior to his visit — good lord, that site sucked big time. During the conversation I couldn’t help noticing that Señor Asshat was treating me like a mouthbreathing idiot — so in turn I told him how I felt about his website.

This did not go down well.

Since then, I’m guessing the guy has repeatedly attempted to get our client to move his business with him. And I suppose it finally paid off. The problem I’m having with this is not so much losing a client — it lies in how the hosting transfer was done: Señor Asshat has basically stolen my layout (copy/pasted html-source, took all the existing graphic elements that were designed by me) and is now presenting it as his own. With a big fat link to his “webdesign” firm. Loser.

The kicker in this whole story is: I had been working on a complete revamp of the site. No more frames, extensive usage of css and xhtml, to make it fast and search-engine friendly. No less than two days after I finished the redesign, in comes the email telling us he’s with Mr Asshat now. His loss, I say.

Oh well, by-gones and all that, yes?