Sorry you two about the lack of updates recently.

Thing is, Gabriela and I are working on an ultra-secret project right now which is taking up much — if not all — of our free time. In the mean time, here’s a stupid one minute sketch of Dave Shae — you know, that css mastermind of css zen garden fame:

World: I present you with Gabriela‘s newly purchased iPod Nano: 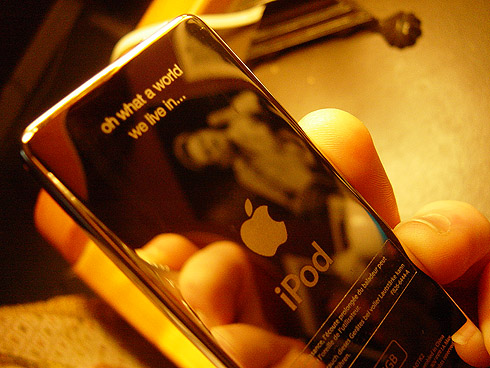 Make sentence with “amazing”, “of”, “thing” and “beauty”. If you’re wondering about the inscription, it comes from this Rufus Wainwright song. Oh, and bonus points for the one who recognizes the identity of the person reflecting off the iPod’s metallic back surface!

At work I’m currently designing a poster for a local junior high-school. They are about to move into a brand new building, and will have a big party with music, drinks and live performances which they obviously want to advertise prior to the event. And they want pictures of all 280 pupils to appear on it. All 280! So I spent most of the day cropping and color-adjusting the digital-camera photos they sent in.

That cd full of kids posing in front of the teacher’s amateur digital camera is gold material for sketching though. In one of Woody Allen’s movies — was it “Annie Hall”? I’m not sure — there’s a scene where he revisits his old classmates, has them stand up in the classroom and say what they became in later life. One goes “I’m the president of [insert multinational here]”, the other goes something like “I used to be a heroin addict, now I’m on methadon”. Well looking at the faces of these kids, I had a lot of fun imagining where they’ll end up in life. Some of their faces will surely show up here sooner or later, in ink.

Until then, I’ll leave you if I may, with a guy who’s Trying To Grow A Chin. The astute observer will notice an accute lack of smiling wrinkles: 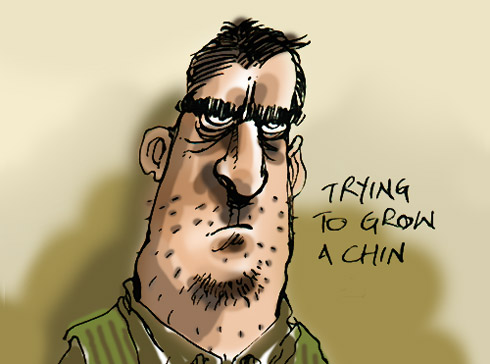 My better half Gabriela had some fun coloring my sorta-kinda-looks-like Walter Matthau drawing. She’s a super-talented graphic designer who has worked in the Argentine magazine/editorial business for years (Perfil! Luna!) and I think it shows: 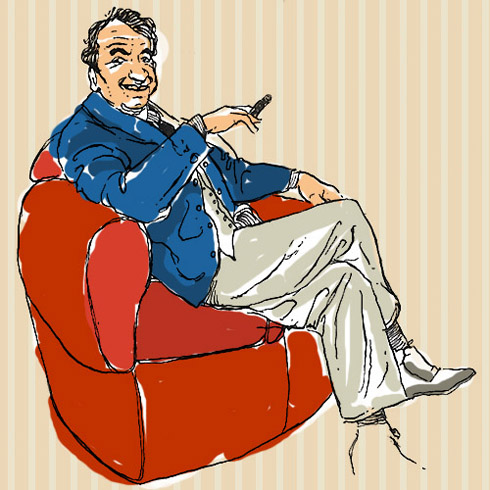 This is all, by the way, part of an ultra-secret project she and I are currently concocting, which should be ready for primetime — oh — by 2015 I reckon.