Went to see Zappa Plays Zappa in Brussels last Tuesday. The accoustics were horrible, in stark contrast to the music which was absolutely superb. Since I have a ZPZ reviews thread open over at Kill Ugly Radio, I figured it was of the utmost importance that I, at least, provided some insightful commentary afterwards. So I printed out the Berlin playlist prior to the concert and scribbled notes on it in total obscurity throughout the show: 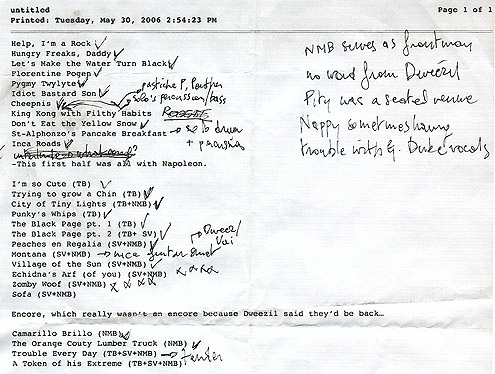 This is just a sample; there were more!
In retrospect, they turned out to be anything but useful. It’s akin to that great Simon Carmiggelt anecdote where he wakes up in the middle of the night with A Grand Idea™, grabs his notebook and, half-awake, in semi-darkness, writes down the Incredibly Insightful Dream which is surely going to provide ideas for his next essay. He wakes up the next morning to have a look at his notebook where, in big emotional letters, it is written: “Little brown squirrel on the road!”.