On August 19 we booked a flight for Buenos Aires, so that Gaby could have a chance to see her dad, whose health was rapidly deteriorating. The flight was scheduled for August 30th.

Early in the morning of August 27, Gaby’s dad passed away. 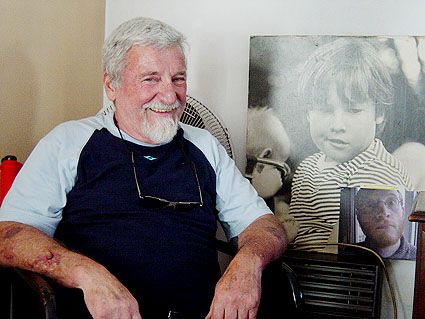 As I write this, Gaby’s on that flight, crossing the Atlantic.

Fridi’s lust for life was incredible and will always be an inspiration for me.

A memory I will cherish forever. The first time he came over to Belgium was also the first time we met in person. At that point, Gaby was already living with me.

One grey snowy day the two of us were walking down the street and he all of a sudden came to a halt. Fridi looked at me solemnly, grabbed my right hand, and spoke to me in Spanish. “Mano” was about the only word I understood — my Spanish was pretty much non-existent at the time. When he finished, he gave me a faux stern look, and I grinned sheepishly and uttered “si, si, heh heh!”

When we arrived home, I told Gaby as best I could what he had been talking to me about, even though I hadn’t understood most of what he had said. She smiled for a moment, then responded: “He meant to tell you: ‘I hereby offer you the hand of my daughter.'”

I’ll miss you much Fridi, as will countless others.

Me Myself And I, Snapshots