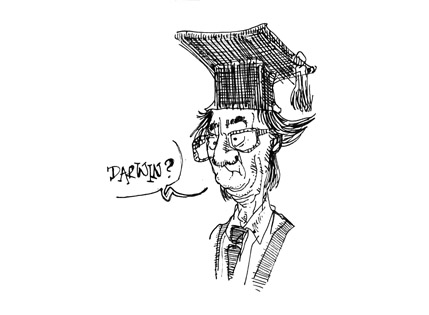 I’m European — not American — so strictly speaking I shouldn’t be poking my leftist communist anti-capitalist Old-European nose into this matter, however: it appears some 70% of all Republicans reject Darwin’s theory of evolution, opting for the Creationism “theory” instead. Pardon my Freedom French Fries but: that is downright ludicrous, and quite scary to boot.

I get the impression that the US majority is silently sliding down toward some medieval perception of the world whereby the earth is flat and has all the other planets and stars revolving around it. Dunno about you, but that scares me.

Frank Zappa, sorely missed these days, had this to say about the matter:

The essence of Christianity is told to us in the Garden of Eden history. The fruit that was forbidden was on the Tree of Knowledge. The subtext is, All the suffering you have is because you wanted to find out what was going on. You could be in the Garden of Eden if you had just kept your fucking mouth shut and hadn’t asked any questions.

We are moving toward a fascist theocracy.

Hopin’ for the best, and so glad I’m not living in the land of the free right now…

Asshats, Drawings, Me Myself And I