Prequel: have someone take your picture in a grungy, grainy fashion. This will increase your street credibility, should your recording ever actually go somewhere. Some pointers: look sulky, slightly bored and a little angry on the side, if you can. Here’s an example: Down to business. My pal Franky came over last Thursday night for some music-making fun. Now you may not believe this but between the both of us, we can write a rather decent song in a matter of minutes — lyrics, melody and bridge all-included. Chord-wise, C – F – G never fails. Throw in a major E or D every so often and you’re bound to end up with a winner.

The essential part is to find a catchy title, and the rest just flows from there. First thing we came up with was a nice little Weenesque country ditty entitled “I’m Gonna Show My Willie To The World”. This proved to be problematic in terms of rhyme and verse diversity, so we ended up recording a tune with a much easier topic: that crazy little thing called love!

On to the set-up. That is to say: a tripod with two microphones taped on top of it — the tripod itself being taped upon a chair: You will note Franky’s writing out lyrics as we move to the recording stage. Next: recording the guitars, and nothing but the guitars. A click-track keeps us from going out of sync. By now it’s time to go vocal. Lyrics should be written on little scraps of paper, torn in half so as to distinguish leads from backing vocals. It is essential that silly hats be worn at this stage: Next: discuss! That track’s too loud! No it’s not! You should re-record that vocal! But it sounds perfect! Tosser! Wanker! Silly hats are optional at this point. And so the evening comes to an end. Guitars are packed in as eyelids get heavy. It is time to go to sleep and prepare for tomorrow’s inevitable hangover. But for now: bliss! 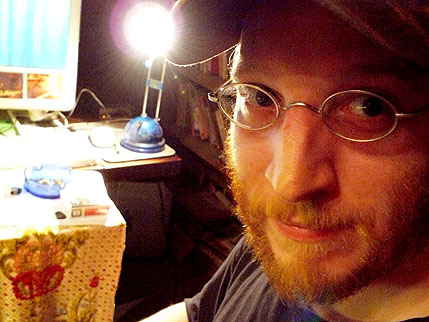 Me Myself And I, Music